Desks are important, even in this day and age where multitasking gadgets such as tablets, cellphones and MP3s reign supreme. That is why, through it all, there has always been a market for every desk under the sun.

However, there are so many types that there isn’t a strict rule in order to categorize them. Around ten or so years ago, computer desks all looked the same: a titled table top, a small rolling keyboard shelf, upper and lower shelves for the printer, and the CPU.

Now, companies have tried combining this imagery with aesthetics, resulting in simple to complex designs. Take a standard table without drawers or cabinets, but with grommets and a keyboard tray. These are called computer desks.

Then there are those tables with antique designs. You can easily call them secretary tables, but they are renovated to store CPUs, cable wirings and backlights. Do not forget the bigger desks that can literally house a printer, a scanner, two monitors, cables and other wiring. They are called computer desks, too!

Obviously then, you need to spot the not. Not all desks are fully equipped with the needs of your personal computer. Writing desks are especially short on the equipping. Computer desks are better.

They are the ones the contain most of the following: a lot of space for your monitor, tower, other computer accessories you usually use, holes for where wirings are to go through, and spaces for other peripherals (loudspeakers, printer, and mouse).

In addition, doing other office work on suitable computer desks are possible. Other minor additions are shelves, or a DVD or CD rack, among others.

What is a Writing Desk

Writing desks are a bit different. They usually have tops to make sure your write ups are hidden. They also have small drawers on the side. The catch with them is that they’re good enough for laptops. In a way, most modern writing desks are being called computer desks only have a keyboard tray. They are not built to support desktop monitors, CPU and printers.

So, if you are into gaming, an IT personnel or simply using a personal computer rather than a laptop, it’s highly recommended to buy a real computer desk. Or, at least buy a hybrid table that effectively combines both the simple appeal of writing desks and the functionality of computer desks – take Bivi tables, for example.

Here are some other things that may help you decide which is which.

Sometimes, the bulk is found at the length of the desk(s). Other times, computer desks may have alternative spaces, such as a raised platform for your CPU or printer.

The most ambitious computer desks not only contain drawers but also filing cabinets, lights on the corners, and a DVD/CD rack. This makes them more space-consuming. This is particularly true with desks being used in gaming and in the office.

Contemporary writing desks often are simpler in design than computer desks. Of course, it does not mean they are not pleasing to the eye. Since they provide less features, they are less fussy in terms of style. Computer desks, on the other hand, tend to look more complicated. The L-shaped or T-shaped desks are good representatives of the fact.

This greatly varies on which company and style you would prefer. However, for most part, writing desks are cheaper than most computer desks.

This factor is a 50-50. Durability often depend on the material and designs used in the production, on how the desks are used as well as total weight of the equipment being placed on and into the desk. Usually wood materials are the most preferred. However, laminate, PVC, steel, MDF (medium density fibreboard) or melamine should be considered. Let’s go deeper into the aspect of materials.

Wood is the most versatile of all the materials. You can have any wooden parts easily replaced. Cherry and walnut are the most expensive wood, while maple and oak are cheaper. You may also want to consider bamboo, as it is the cheapest.

The catch is that it is seldom used in carpentry, even in computer desks. Melamine is imitation wood. It is the most affordable of the lot, without having to give up on durability.

Laminate materials is actually an overlay of pressurized plastic over wood. This makes the table lasts longer than untreated ones. It’s usually advisable for light to moderate use. Choose the laminate material with the indication of “high pressured laminate” in the specs.

Steel may not be the most elegant of all materials, but they are the most long-lasting.

There are a lot of desks in the market that often mix materials such as PVC with a steel frame for better results. This mix is usually good for moving around.

Like what was mentioned before, writing desks contain less storage spaces. You can convert them into computer desks with add ons later on, though – that is, if you are willing to do some hands on projects. 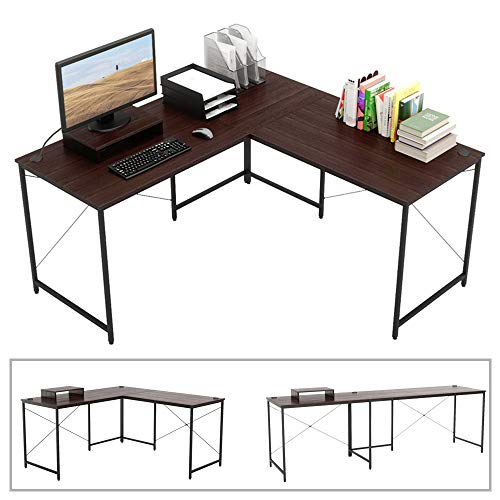 ComputerDeskz.com is a participant in the Amazon Services LLC Associates Program, an affiliate advertising program designed to provide a means for sites to earn advertising fees by advertising and linking to Amazon.com.

Scroll back to top